You deserve the truth.Claiming there is a hail storm lawsuit “crisis,” insurance lobbyists are pushing SB 10 and HB 1774. But, what do these bills actually do?

ARE THESE BILLS REALLY JUST ABOUT HAIL STORM LAWSUIT ABUSE?

These bills impact all disputes with your insurance company – not just hail claims and not just claims considered “frivolous.”

The bills effectively strip home and business owners of their ability to hold their insurance company accountable. This includes all types of property damage. The bills do not distinguish between claims that are valid and those that are not.

IS THE TEXAS INSURANCE MARKET PROFITABLE AND COMPETITIVE?

The Texas insurance market is incredibly robust, increasingly competitive, and highly profitable, according to TDI. 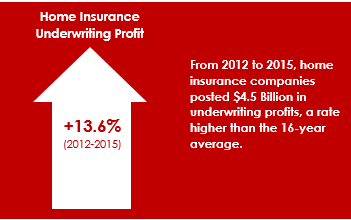 Between 2012 and 2015 – the period insurance lobbyists say was a “crisis” for Texas insurance companies – insurers posted $4.5 Billion in underwriting profits. This equals 13.6% profit just on premium payments and does not include additional market gains. This is significantly higher than the 16-year average.

IS THERE AN INSURANCE LITIGATION CRISIS IN TEXAS?

Despite a series of catastrophically severe hail storms in recent years, data from TDI’s comprehensive market review shows that insurer losses were only marginally higher with persistently low litigation rates.

Following extreme weather events with major property damage like those in the Rio Grande Valley, the Panhandle, the Metroplex, and Bexar County in recent years, more claims are filed. This leads to more disputes as insurers attempt to cut their losses by paying fewer claims. In fact, the TDI data indicates that between 2012 and 2015 insurers paid 9% fewer hail claims per 100 policies.

And, in cases of fraud, insurers can recoup their costs.

Businesses Across Texas Say NO to TLR’s Insurance Bill